Tales from a Two Party Dystopia 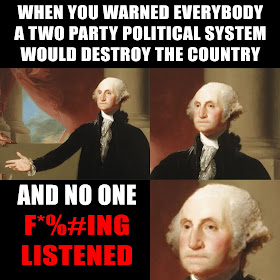 *Profanity warning: this one is particularly colorful in language. Avert sensitive eyes.*

Listen my children and I’ll tell you a tale of absolute fuckery and all sorts of fail.

THE SCENE: a bitter battle over the appointment of a Supreme Court nominee in the United States of Americs. Brett Kavanaugh is a “Republican” with all the bullshit that entails. (Don’t get cocky, Democrats. You have your own massive piles of crap to deal with.)

Lauded by the prez as pretty much the greatest guy ever, Kavanaugh’s road to the bench has been rather rocky.

Wait a second, say the two people who actually remember civics class … why does it matter that he’s a Republican?

Well, my dears, because for some stupid fucking reason, people have forgotten all about the checks and balances that are supposed to keep political agendas OUT of the highest court in the land.

“Republican” judges and “Democrat” judges ARE NOT SUPPOSED TO BE A THING.

And yet, here we are.

Kavanaugh stands accused of some fucked-up shit from his time at notorious party school Georgetown Prep. And, because literally everything goes back to MFing political parties these days, some “Republicans” are bashing his accusers and making up all kinds of really reallllllllly bad excuses to ram Kavanaugh through to confirmation no matter what.

You see, there's an election coming up, and the window for another slam dunk bred-to-be-red judge on the bench is closing fast.

On the flip side, Democrats are calling for Kavanaugh to be burned at the stake, whether the facts back up the accusations or not.

... also because there's an election coming up, and their window to stave off a Republican majority on the Supreme Court bench (AGAIN, NOT SUPPOSED TO BE A THING) is closing fast.

(Side note: it's supremely difficult to determine how many assault allegations are false, in part due to massive underreporting, but generally it's accepted to be between two and eight percent. Source: https://www.nsvrc.org/sites/default/files/Publications_NSVRC_Overview_False-Reporting.pdf)

The majority of our nation, like the responsible little brainwashed idiots they are, have aligned themselves with their chosen political party and are lobbing memes, insults, “alternative facts” and other miscellaneous crap at each other like there’s no tomorrow.

And then, AND THEN, we have the usual assortment of talking heads spoon-feeding diarrhetic pseudo-news into the minds of their moronic followers, which they in turn vomit all over social media, share, reshare and share some more.

No one in their right mind wants a sexual predator sitting in the Supreme Court. OBVIOUSLY.

WHY IS THIS A THING WE HAVE TO SAY?

And yet, as our forefathers foretold (FORE!) - not even kidding, look up George Washington's farewell address - the good ole' two party system has swooped in to once again cause mass fuckery.

The founding fathers put it more poetically, but you get the idea.

*IF* this guy is a douche canoe to the nth degree, we should proooooobably know about it *before* giving him one of the most powerful roles in government. And yet, we have nothing more than a he said, she said situation (remember now, time is of the essence.)

This is, of course, entirely too centrist and does not generate mass consternation or play into the partisan stranglehold on our nation, so out the window it goes.

And America fractures further down the dividing line of party politics on the way to its own ugly demise.

1) If you blindly align with a specific political party, GO LOOK IN THE MIRROR AND THINK ABOUT WHAT YOU'VE DONE. Now make a decision to make your own decisions, dammit. Don't be a pawn in this horribly corrupt mess of a political system.

2) Check your mother-fucking facts. It's called a search engine and my seven year old is a pro at it, so you can be, too. If you post blatantly slanted or false information, you are part of the problem. (And if the information you post is found to be incorrect after further research, OWN TF UP.)

3) "Train up your children in the way they should go." Teach your little humans to respect each other and themselves regardless of gender, race, etc. Love your neighbor >>> it's called the "golden rule" for a reason.

4) Take the time to research and understand the massive problem of sexual assault outside the scope of party politics. It does exist, it is a problem, and the havoc it wreaks on a person's life should not be disregarded, ever.